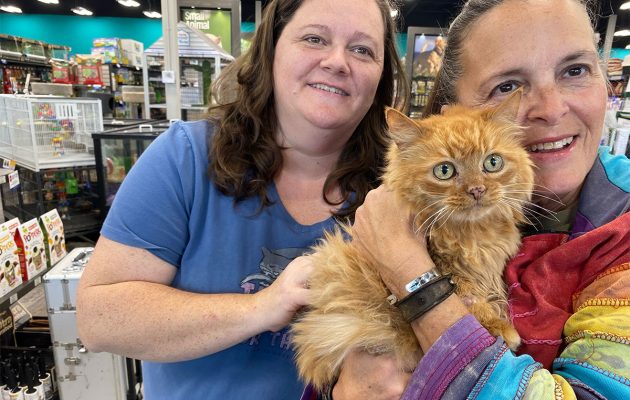 The phone call request for help was one of hundreds that Evelyn Borland receives every year. A hotel manager said a friendly, pregnant cat was crying at the door.

“When volunteer Valerie Hale arrived and cracked open a can of food, she didn’t see the pregnant cat, but several identical tabbies came running from the neighborhood behind the hotel,” Borland said. “Then Valerie was shocked to see a large, gorgeous, ginger cat with long hair and beautiful green eyes. She was so sweet…obviously a lost or abandoned pet.”

Borland and Hale, like so many Jacksonville rescuers, are tireless in their passion to save animals. Hale said Borland is, “…an amazing, wonderful person who has saved and found homes for thousands of cats and kittens that would otherwise never have a chance to be adopted, could suffer or die in the outdoors or be euthanized.” Borland called Hale a “super volunteer” who is also a foster and tireless safetrapper.

Borland is the founder of the nonprofit Springfield Kitty Cat Shack Rescue and a Riverside High School Senior Economics teacher. Hale is a retired IBM Contract Specialist. Borland and her volunteers devote themselves to saving local, potentially adoptable cats and kittens, especially those that are not tame enough or fail other criteria required for acceptance by local shelters.

Muppet, as the gorgeous ginger was named, is unfortunately just one of countless lost or abandoned pet cats that rescuers constantly find. These tame pets, who may have previously lived indoors, somehow end up outside in the elements, desperately trying to survive.

Borland and Hale both said some lost cats have identification or are microchipped and can be returned to overjoyed owners, even after long periods of time. Sadly though, far too many others have no identification, or identification is outdated, never registered or the owner does not respond or rejects the pet.

In Muppet’s case, she had no identification, but was already spayed. The veterinarian found injuries: a bruised side from being kicked or hit, and raw paw pads the vet described as road rash. After the standard two-week quarantine and no owners found, Muppet was among the lucky ones; she was adopted.

The soothing sight of a beloved house cat peacefully asleep in a favorite chair or playing in safety and comfort at home, makes it difficult to imagine the daily struggle for survival that homeless cats face outdoors. Whether they are tame, partially-tame or feral (wild), all homeless cats living outdoors are referred to as “community cats”, by shelter personnel and rescuers.

Community cats each have very different backgrounds and behavior. Among the cats found roaming outdoors are tame pets who might wear identification tags, have microchips and mingle with homeless cats, but usually stay close to home and owners. They normally have sleek coats, are healthy and typically return home like clockwork for food, attention, care and shelter. Their owners allow them partial or fulltime outdoor access.

Some community cats are former pets who, for any number of reasons, have become homeless, but may still be fully or semi-tame. These cats may be healthy because they are often fed and cared for by residents in the neighborhood, but are not actually claimed as pets. These former pets may respond to the human voice and approach in a friendly manner. They purr or meow for food, rub against a leg and roll on the ground, begging to be petted or held, eager for attention.

However, some former pets who have been homeless for a longer period of time, might have experienced cruelty and abuse from human interaction. They may have suffered injury, illness, starvation, or the dangers of loose dogs or traffic mishaps.  Negative experiences can cause the once-tame, former pets to withdraw, become fearful, and increasingly feral.

Feral cats may also have once been pets or they may have been born wild. Their traumatic life experiences have made them desperate to avoid any human interaction whatsoever. They will not purr or respond to the human voice, other than to frantically run and hide. They violently react or injure themselves to escape confrontation or capture. Only an experienced rescuer or professional safetrapper should attempt the humane capture of stray or feral animals.

Ferals are instantly distinguished from all other cats by behavior: fast, darting movements, low to the ground or crouched, cannot be touched, handled or approached. Ferals may have tipped ears, visible scars, wounds, missing fur, skin conditions, appear thin or in overall poor condition. They normally remain hidden during daylight hours, have abnormally low life expectancy of about two-five years and gather near available food, water and shelter.

Some community cats reside in cat colonies, monitored year-round by dedicated volunteers. These colonies offer a proven method of caring for groups of community cats, combined with TNR (trap, neuter, release) to stop the endless cycle of litters of unwanted kittens. TNR ensures zero population growth and the gradual natural decline of the colony.

Every cat in the colony is screened for owner identification or taken to any veterinarian for a free microchip scan. If there is no owner and the cat is healthy and adoptable, it is spayed/neutered, receives veterinary care and placed for adoption.

Semi-feral or feral homeless cats are transported in safetraps to First Coast No More Homeless Pets for TNR, vaccinations, disease tests, check-up and any needed veterinary treatment. Each healthy cat also receives the slightly tipped ear as the permanent visual sign that TNR has been completed, before its return back to the colony.

Feral cats are considered unadoptable except to a farm or stable for rodent control. Kittens born in the wild, orphaned or abandoned at cat colonies, under the age of four months, can be successfully tamed and adopted according to experts.

The consistent care colony cats receive does mean that their average lifespan of two-five years living outdoors, can extend up to ten years. This longevity requires a long-term commitment from volunteers to manage the colony.

The Humane Society of the United States, domestic animal welfare organizations and veterinarians urge pet owners to spay and neuter their cats for  health reasons and because of the thousands of unwanted animals that end up in overcrowded shelters. One unspayed feline can breed at four months, have four litters per year, with up to eight kittens in each litter, directly contributing to the births of thousands of unwanted kittens, according to the Humane Society.

Spayed female cats are healthier because they cannot develop uterine cancers and their risk of mammary cancer is reduced by 25%. They are also less prone to urinary tract infections and hormonal changes, according to the Pet Health Network.

Neutered male cats reap health benefits as well. They will not develop testicular cancer and on average live 40% longer than unaltered male cats. Neutered males are calmer, less aggressive with other cats, tend not to wander great distances and may never mark their territory with urine spray.

In anticipation of kitten season, the Jacksonville Humane Society (JHS), Animal Care & Protective Services (ACPS) and First Coast No More Homeless Pets (FCNMHP), urgently request that residents who find kittens, wait and watch for the mother cat to return and resist the urge to “kitnap” the kittens. The kittens’ best chance of survival is to be nursed by their mother. If the mom returns, provide food, water and shelter and when the kittens are eight weeks old, have all spayed/neutered and find them homes.

If mom does not return, contact JHS for care instructions and support, then find the kittens homes once they are weaned. For kitten medical emergencies such as struggling to breath, open wounds or visible ribs/spine, contact ACPS at (904) 630-2489. JHS and ACPS need volunteers, fosters and items donated from their website Kitten Wish Lists. FCNMHP needs volunteers and donations through their website.

Springfield Kitty Cat Shack Rescue fills a critical gap in saving, taming and finding homes for countless kittens that are too big to be accepted by ACPS (over two pounds), or not tame enough to be accepted by JHS. An all-volunteer non-profit, the organization has no physical shelter but relies on a network of fosters. They always need volunteers, fosters, donations for vet bills and supplies from the website or Amazon Wish List, especially cat food and litter. They have fully-vetted cats and kittens available for adoption for $75 single and $130 for a pair.