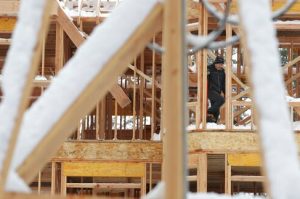 America’s employers added 467,000 jobs in January in a sign of the economy’s resilience even in the face of a wave of omicron infections last month. The government’s report also drastically revised up its estimate of job gains for November and December by a combined 709,000. It also said the unemployment rate ticked up from 3.9% to a still-low 4%.

Average long-term U.S. mortgage rates were flat for a third straight week after rising about a half percent early in the year. The average rate on the 30-year loan held at 3.55% from last week, mortgage buyer Freddie Mac reported Thursday. It stood at 2.73% a year ago. The average rate on 15-year, fixed-rate mortgages, popular among those refinancing their homes, fell to 2.77% from 2.80% last week. One year ago, the rate was 2.21%.

A new monthly report shows that a loss of manufacturing jobs combined with other factors to slow growth in the regional economy of nine Midwest and Plains states. The overall index in January for Creighton University’s Mid-America Business Conditions survey released Tuesday fell to 56.2 from December’s 64.6. Any score above 50 on the survey’s indexes suggests growth.  The survey includes the Dakota’s and Minnesota.

The Labor Market Information Center has released the latest Online Job Openings Report (OJOR), a monthly summary of online job openings and active résumés from Job Service North Dakota’s labor exchange system. North Dakota had a total of 16,618 open and available online job openings in January 2022, a change of -2.7 percent (-455) from the prior month and +25.6 percent (+3,390) from the same month one year ago.

ACME Tools is asking the Grand Forks JDA to approve a $76,697 PACE loan to help support an expansion in the company’s e-commerce business model.   The funding will leverage a $142,436 dollar Bank of North Dakota loan to help buy down interest on a $3 million dollar private loan.  The move is expected to create 48 jobs.  The request has already been approved by the Grand Forks Growth Fund Committee.  The JDA will take up the request Monday night.

University of North Dakota President Andrew Armacost will chair the first UAV Technology USA Conference Monday and Tuesday in Arlington, Va., which features speakers from around the world discussing technology and training for military unmanned aerial vehicles (UAV).  Armacost says the conference is an opportunity to identify how UND’s academic and research programs can continue to grow in support of national security needs.

Grand Forks issued permits for 99 single family home and 47 townhomes in 2021.  According to a planning report the city has averaged around 100 sing family permits per year.  Grand Forks also added 168 multi-family units last year.  The report suggests in order to keep up with the average growth rate of the community, Grand Forks should see approximately 300 multi-family units built each year.

The U.S. Department of Health and Human Services (HHS) awarded $1,089,740 to Mayville State University.  The Head Start funds will promote school readiness for young children and toddlers from low-income families by enhancing their cognitive, social, and emotional development as well as early learning, health, and family well-being.

A new Minnesota Department of Agriculture (MDA) grant will help Minnesota service stations who want to offer customers more and greener options at the pump.  The Agricultural Growth, Research, and Innovation (AGRI) Biofuels Infrastructure Grant Program will award up to $6.6 million to offset the cost of investing in retail petroleum dispensers, fuel storage tanks, and other equipment certified as compatible with blends of motor fuel containing at least 25% ethanol.  Applicants may request up to $199,000 for an individual project, and a minimum of $5,000.

Tesla is recalling more than 817,000 vehicles in the U.S. because the seat belt reminder chimes may not sound when the vehicles are started and the driver hasn’t buckled up. Documents posted Thursday by safety regulators say the recall covers the 2021 and 2022 Model S sedan and Model X SUV. Also included are the 2017 through 2022 Model 3 sedan and 2020 through 2022 Model Y SUV.

Visit Greater Grand Forks has unveiled the 2022 Official Visitor Guide.  40,000 copies of the publication were printed and will be distributed in local hotels and businesses, in Minnesota and North Dakota statewide information/rest area centers, CAA offices in Manitoba, University of North Dakota, Grand Forks Air Force Base and the Grand Forks International Airport.

The Circle of Friends Human Society will hold an open house for its new medical service facility at 4375 North Washington on February 10th.  The project cost was around $600,000.  Tours will be available between 11:00 a.m. and 6:30 p.m.