Whitefish residents Geoffrey and Lisa Calaway will reign as the Whitefish Winter Carnival King Ullr LXIII and Queen of Snow. They were crowned during a coronation ceremony Saturday evening in downtown Whitefish.

Geoffrey was born in Great Falls, Montana, the last of nine children. His parents started and operated a potato chip and french fry company, Big Stack Chip and Foods, for 24 years.

He spent his winters skiing King’s Hill and summers at the family cabin on Lake Blaine. The roller skating rink at Lake Blaine was always a summer highlight. His parents retired and moved to Boise, Idaho where Geoff graduated High School. He then went on to study at Colorado State University and University of Utah, majoring in skiing, while managing to get a Bachelor of Science in Biology and Chemistry. He went on to receive his doctor of optometry degree at the University of Houston, College of Optometry.

After an internship in London, England, he entered an amazing practice with the Berkley Eye Clinic in Houston. The clinic was involved in multiple FDA therapeutic and surgical studies and was one of the first FDA sites for LASIK refractive surgery. He served on the Texas Optometric Association and Harris County Optometric Boards and was an Adjunct Professor of Optometry at the University of Houston College of Optometry. He was a proud member of the Society to Prevent Blindness as well. He practiced for 21 years, but after numerous back surgeries, he and his wife, Lisa, decided it was time to return home. Whitefish was the perfect place to raise their two boys, Ian and Aidan. In the summer of 2007, they packed up a moving truck and drove to Whitefish where the summer heat that year set an all-time high.

Even in a back brace, Geoff found his second calling in volunteer coaching. Soccer, Little Dribblers basketball, baseball and even Little Guy Football, after reading Football for Dummies first. He taught the boys the beauty of Nordic and alpine skiing leading to a decade of ski racing all over Montana and even Alaska. He served for many years as a board member of the following amazing nonprofits; the Flathead Valley Ski Education Foundation, promoting youth ski racing in the valley, Flathead Rapids, as well as the Knights of Columbus at St. Charles Borromeo. He is currently serving on the Alpine Theater Project board, and continues his proud association with the Knights of Columbus and all of the charitable activities they are associated with.

Geoff uses his past optometric skills as a member of the Lions Club of Whitefish and has been doing the school vision screenings with the help of the Lion’s Club generous donation of the two high tech, Plus Optik, vision screeners and multiple worthy volunteers!!

He loves all things outdoors and chose to live in Whitefish because of the close proximity to the ski hill where he would spend every second of the winter season, if he could. In the summertime, he loves spending time on Whitefish Lake and Glacier Park.

Geoff says he is very excited and humbled to be asked to be King Ullr LXIII and is looking forward to representing Whitefish.

Lisa was born and raised in Salt Lake City, Utah. She graduated from the University of Utah and moved to Los Angeles where she worked for SkyWest Airlines. While in Los Angeles she was hired with United Airlines as a flight attendant and was based in London, England, for 6 and a half years. While in London, Lisa met Geoff Calaway and promptly moved to Houston, Texas where Geoff was practicing optometry. Fifteen years and two amazing boys later, Geoff and Lisa wanted to return to their roots in the west and decided upon Whitefish. In Whitefish, they found the village they were looking for to raise their boys. Ian was 5 and Aidan was 3 when they arrived here in June of 2007. Happy to leave the big cities behind and jump into getting to know their chosen happy place.

Lisa became a member of the St. Charles Borromeo choir and taught the kindergarten class there for years until she was asked to join the Whitefish PTA. The PTA has since turned into the Family Involvement Team(FIT) and has joined with the Whitefish Education Foundation, where Lisa serves as the chairperson for the FIT. She loves teaching the Arts with the Masters classes at Muldown Elementary and she and her husband have become regulars in helping with the Lions club eye testing at all the Whitefish schools. She has served on the HOA board for the Grouse Mountain homeowners and currently serves on the board of ATP. She has worked at the Village shop for over 10 years, and owns her own property management business, and loves volunteering at the Whitefish Theater Company box office and helping with Feat x Feet where her boys have loved being a part of the tap-dancing ensemble.

Taking full advantage of all Whitefish has to offer, Lisa loves boating on Whitefish Lake, golfing, Nordic and downhill skiing, hiking in Glacier Park and scrapbooking. She loves her book club and her Friday morning breakfast club.

Lisa says she is so excited to be a part of the tradition of the Whitefish Winter Carnival and very humbled to be asked to carry on such an amazing tradition.

The Whitefish Winter Carnival continues through Feb. 5. For a full slate of events go to whitefishwintercarnival.com. 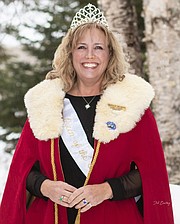