Senators, members of Congress, and other dignitaries attended the memorial service for the late Johnny Isakson on January 6, 2022. Isakson passed away in December 2021.

Isakson represented Georgia in the Senate for 15 years until his resignation for health reasons in 2019.

He died in December at 76 years old.

The memorial service began at 2 p.m. on Thursday at Peachtree Road Methodist Church.

U.S. Senate Minority Leader Mitch McConnell, a longtime colleague of Isakson, led a delegation to Atlanta for the service and delivered remarks.

“I feel pretty certain that the halls of heaven were filled to capacity with everyone who wanted to welcome Johnny first hand. Shake his hand, share a laugh, hear his stories. I bet it was standing room only. The Johnny Isakson fan club never fails to pack a room,” McConnell said.

Sen. Raphael Warnock, who replaced Isakson in a special election, passed a bipartisan resolution Wednesday honoring the former senator with support from all 99 other senators.

The family is asking in lieu of flowers to donate to The Isakson Initiative, a nonprofit dedicated to raising awareness and funding for research related to neurocognitive diseases, including Parkinson’s, Alzheimer’s and related dementia. 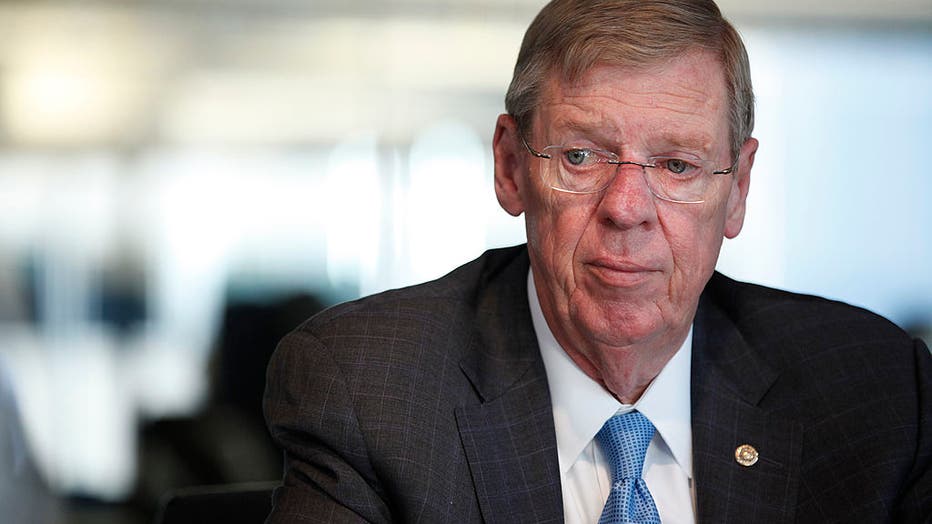 Who was Johnny Isakson?

Born in Atlanta, the 1966 University of Georgia graduate served in the Georgia Air National Guard from 1966 until 1972.

Isakson served in both the Georgia state Senate the U.S. House, but in November 2004, Georgians hired him to represent them in the U.S. Senate.

The three-term Republican senator stepped down in December 2019 because of health issues. He dedicated the remaining years of his life to raising awareness and funding for research related to neurological diseases such as Parkinson’s, Alzheimer’s and related dementia through The Isakson Initiative.

In 2016, Sen. Isakson made history, becoming the first Republican from Georgia elected to serve a third term in his seat.

“I’m going to be a constructive player in the US Senate,” he said.

Retired U.S. Sen. from Georgia, Johnny Isakson, called late Rep. John Lewis a friend. Lewis was there for the beginning and end of Isakson’s political career.

The issue he fought most strongly for was supporting veterans, becoming the chairman of the Senate Committee on Veterans’ Affairs in 2015.

“No veteran should ever get hung up on, get a busy signal, or not get the help they need,” he said at the celebration of the 2016 opening of a veterans’ crisis center. “They didn’t get that option when they were on the battlefield and we’re not going to take that option to do that as veterans’ services people.”

In 2017, the conservative voice of Georgia crossed the aisle, backing President Barack Obama to sign a bill aimed at preventing suicides among military veterans.

He served as its president for 20 years, growing it to be one of the largest residential real estate brokerage companies in the Southeast.

It’s an experience that helped him represent Georgians from across the state.

Isakson and his wife Dianne married in 1968. They have three children and eight grandchildren.