There are two ways most of us adopt new technology; either we are sold something we never even knew existed or we have a problem that needs solving and someone has built something to sort it.

That first one is fun. Playing with crazy gadgets you probably don’t need sounds like a great way to waste some time.

But the second thing, discovering a product that does exactly what you need it to, thereby improving your quality of life? That’s truly satisfying.

Even when the problem you need solving is as simple as needing a thing to hold your thing.

If your workspace is anything like mine, your desktop is more cluttered than you’d like. As you can imagine, because I’m constantly trying out new devices and accessories, I end up with many of them stacked up all over the place, often making it difficult just to access my keyboard, mouse and screen to write these reviews. (Especially given sometimes I’m reviewing keyboards, mice and screens)

That’s why having just the right stand can be a real lifesaver.

Today I bring you stand solutions for your tablet, headphones and handset – but these aren’t just accessories to hold your gadgets out of the way, they each have a little trick up their sleeve to push them up your stand shopping list.

Firstly, and perhaps most essentially, let’s get a hold of your iPad, tablet or even your phone with the Twelve South HoverBar Duo. 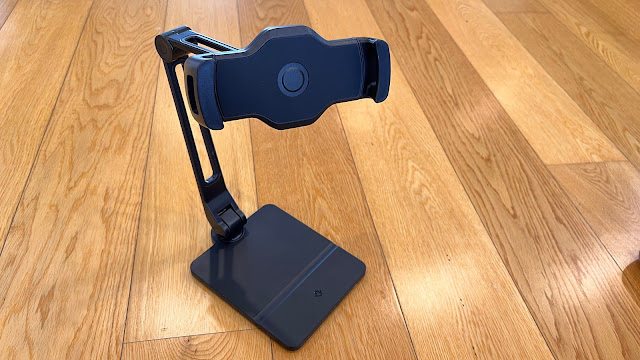 Other than a keyboard cover, an accessory like the HoverBar Duo should be pretty much essential for any iPad owner. If you’ve ever balanced your tablet on a stack of books and boxes to make a video call… If you’d like to use your iPad as a secondary screen for your iMac or Macbook… even if you just want to watch a step-by-step recipe vid in the kitchen, you’ll know exactly what I’m talking about.

The first thing you’ll notice about the HoverBar Duo is its solid construction. This is no surprise; every Twelve South product I’ve ever tested has been made from only the highest quality materials and engineered to exacting standards. 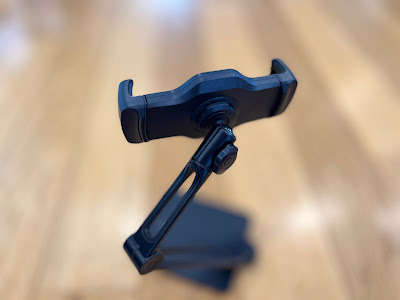 The spring-loaded iPad clip itself is a perfect example. Compared to other, cheaply manufactured holders I’ve tried before, everything feels firm, tight and durable. If anything, I was a little nervous the first time I inserted my iPad Air in place because I wondered if the springs were a little too firm. My concerns were unfounded of course and instead the result was a totally secure iPad, now up at a much more convenient eye-level.

The clip retracts narrowly enough to hold most phones too, while the supporting arm is hinged in two places with a ball socket at the top meaning your device can be held at literally any angle. The hinge-joints can be tightened or loosened with the included allen key, leaving it up to you if you want your stand to remain adjustable or locked in your ideal position.

And the reason it’s not just called the HoverBar? You can use it two ways; sitting on your desk or benchtop or suspended from above by clamping it to a shelf. This “Duo” feat is made possible with the inclusion of both desk base and shelf clamp in the box. 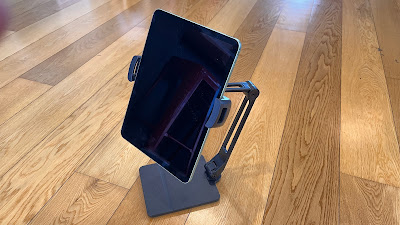 The desk base is wide and heavy, with rubber feet in each corner, providing completely stable support. At the same time, it’s very flat so you can store other items on top of it and there’s even a groove to stop your pen or stylus rolling away.

However, if you want to keep your desk or benchtop completely clear, then the clamp is the way to go. Again, a few twists of the included allen key will let you swap out the stand for the clamp and you’ll be hanging from the ceiling in no time.

Meanwhile, if it’s your headphones that are cluttering up your desk, the Satechi Aluminium USB Headphone Stand might well be the way to go. 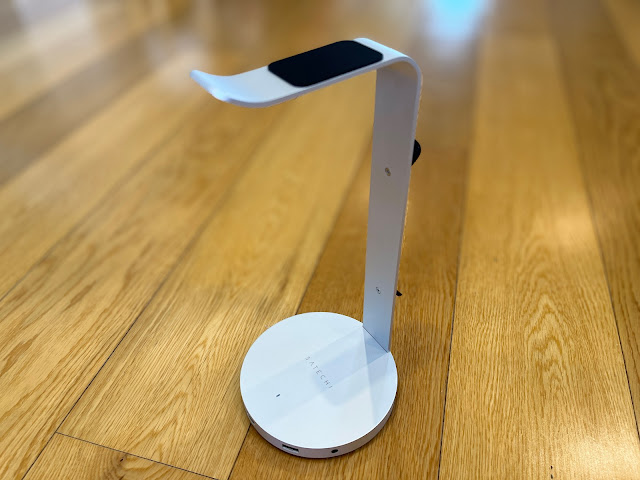 You might think if you’ve seen one headphone stand, you’ve seen them all. But just like Twelve South, when it comes to build quality, Satechi has impressed me before. Sure, the idea of hanging up your headphones to get them out of the way isn’t new but there’s no denying the elegant look of this all alumunium effort, with rubber non-slip feet for stability and a rubber pad at the top to protect your headphones and help keep them in place.

There’s convenient cable storage at the rear of the stand to keep things even more tidy but this stand’s greatest advantage is also all in the name; it’s not just a stand, it’s a USB hub too, providing you with three full-sized USB-A ports you didn’t have before. 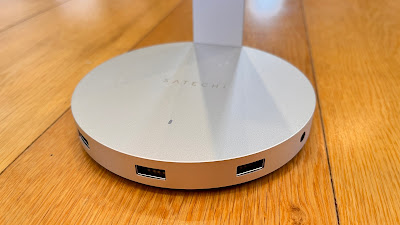 I’ve often lamented the lack of ports like these on modern laptops and even the oh-so-stylish iMac hides all its ports away behind the screen where they’re hard to reach. The Satechi Aluminium USB Headphone Stand connects via a hardy-looking USB-C cable and gives you easy access to those three USB-A’s front and centre. What’s more, there’s a headphone jack built into the base of the stand too – a major bonus if your only available jack is hidden away somewhere at the back of your PC tower or perhaps you don’t have one at all.

This stand takes care of all those issues in one fell swoop. I’m not sure why there’s a white status LED on the top of the base – if it’s not plugged in, you’ll know because it won’t work. Other than that, great stand.

But the PowerPic mod Wireless Charger is even greater. 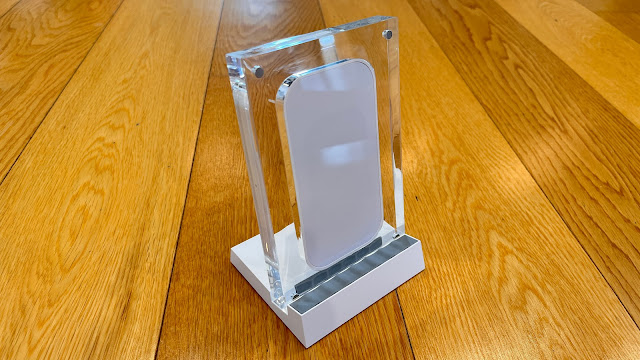 I know it’s not even February yet but this little stroke of genius is already in the running for my favourite gadget of the year. 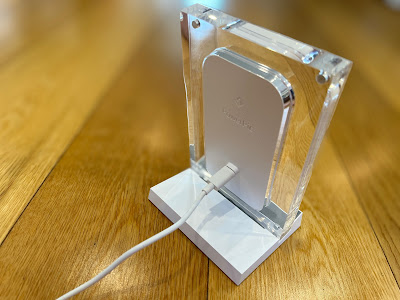 It’s another piece of brilliance from Twelve South and it’s definitely one of those, “Why didn’t I think of that?” kind of ideas; a charger that doesn’t look like a charger because it’s also a photo frame. Even just as a photo frame, it would be a pretty cool design – basically a big chunk of lucite with a magnetised front panel so you can easily insert any 6 x 4 photo, or just print one off like I did. Once your picture’s in place, you can insert it into the angled base in either portrait or landscape orientations.

Obviously, the really cool part is you can plug it into a wall charger and then it becomes a lot more useful than just a photograph. The rubberised ledge at the front of the base will hold your phone (or even the latest Kindle) safely in place while it charges wirelessly. Simple idea, brilliantly executed.

You may have picked up I’m somewhat obsessed about unnecessary LED lights – especially in the bedroom. Here Twelve South gets it just right; a light on each side lights briefly to let you know your device is charging correctly and only remains on and flashes if you haven’t put your phone in quite the right place. 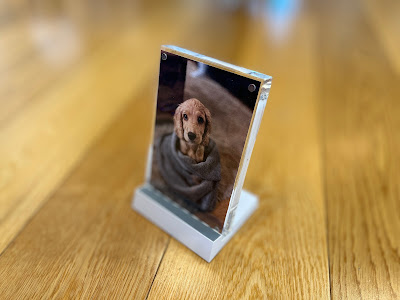 The main reason I love it so much is because the Domestic Manager loves it so much. I’ve been trying to get her to switch to a wireless charger for ages but I think she didn’t want to give up the space on her bedside table.

That all changed once she saw the PowerPic mod. Although that may have had something to do with the picture of our puppy I put in it. How could she resist that?

The lesson is, if you have something but you don’t have a place to put it, it could be you just need the right stand.